If you’re familiar with American Horror Story, then you already know it’s a popular show centered on a large number of characters found in different locations. Fans get sucked in and kept on the edge of their seats by the many sinister and plot-twisting episodes.

The creep factor alone makes costumes from American Horror Story characters perfect for Halloween. Perhaps the best known example of this is Twisty the Clown: a popular character with the innate ability to strike fear into anyone who looks at his face. He really does have a face only a mother could love! 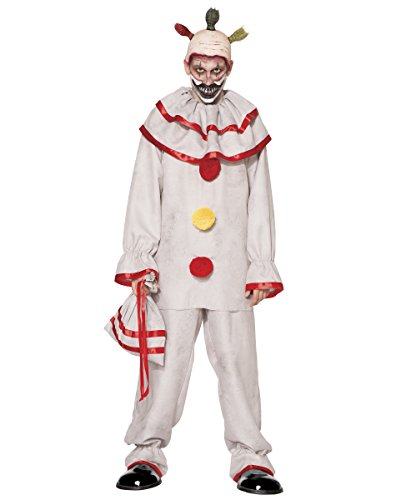 Twisty the Clown costumes are quite popular, and many feature latex masks that are almost perfect replicas of his face. They are designed to be attention grabbing, heart-pumping, and are perfect when you need a little extra “scare factor”.

Twisty the Clown masks aren’t complete without featuring his 3 crazy tufts of hair. Many fans believe his three tufts of hair resemble a type of Mohawk in the middle with two horns on the sides, and who are we to disagree?

American Horror Story Halloween costumes featuring Twisty the Clown usually come in two main varieties: either mask alone or mask with the rest of the clown outfit included. The clown outfits are typically all white and often consist of just a pair of pants and a shirt with 3 colorful pom pom balls running down the front of it. If you dig around, you can find these costumes with gloves, but that feature isn’t always included.

Another American Horror Story character expected to be a big hit this Halloween is Larry Harvey. With a wild hairstyle, burn marks on the left side of his face, and dark motives, Larry Harvey is another perfect costume fit for Halloween. 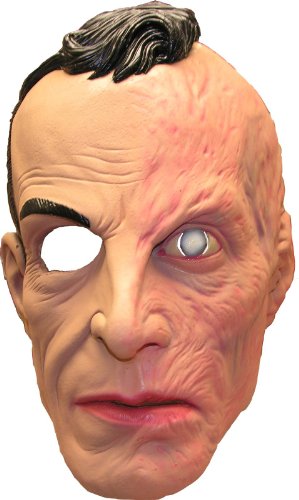 Some Larry Harvey Halloween costumes include just the facial mask. But with burn marks and creepy eyes, you’ll have little trouble scaring the daylights out of someone. Look for these costumes in both adult and teen sizes.

A third American Horror Story character you’ll want to consider this Halloween is Pepper. Her story resonates with many fans because she was abandoned by her family when she was born. She is often mistreated due to the way she looks. At one point, Pepper even gets framed for a murder she didn’t commit and is sent to the asylum at Briarcliff Manor.

If you want to create a bit of mystery and intrigue, Pepper is the character for you. The most prominent features of many Pepper costumes are the facial features that include misaligned teeth protruding from her wide gums. Other notable features of Pepper Halloween costumes are a flowery muumuu and her mostly bald head, which commonly features a topknot and girlish bow.

This Halloween season there are many terrific American Horror Story costumes to choose from. We don’t expect them to stick around though, so be sure to order online early. Otherwise, you may miss out on your favorite character or the perfect size!