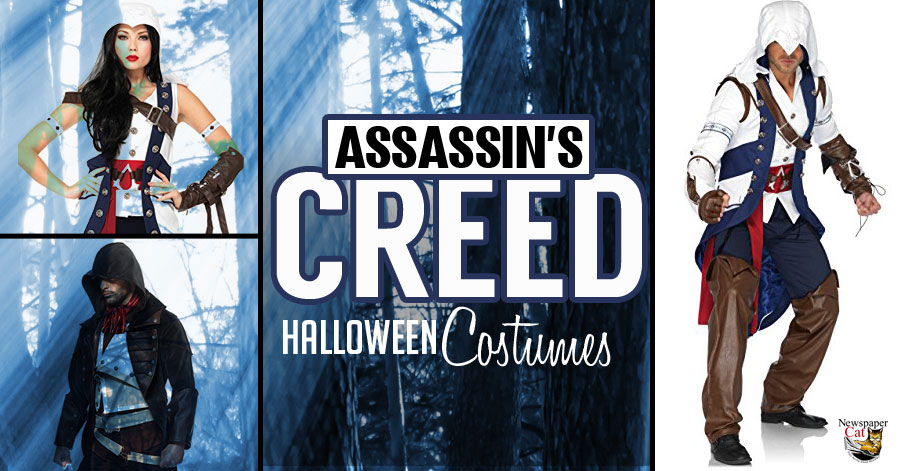 To say the Assassin’s Creed video game series has thousands of loyal and diehard fans would be an understatement.  With each new release, more and more players jump on board, as the demand for this video game series continues to soar.

With that being said, it’s obvious why Assassin’s Creed Halloween costumes are a huge hit this year.  With many popular characters to choose from, fans of all ages can dress up and experience what it’s like to be a “real assassin”.

One of the more popular Assassin’s Creed costumes is Connor.  Men, women, teenagers, kids, and even infants can stand strong against the Templars in one of these stylish and clearly recognizable costumes.

Those familiar with Assassin’s Creed 3 will appreciate the attention to detail that often goes into the higher quality Connor costumes.  These outfits generally include the overly long jacket in white with blue trim along the open front and a single blue stripe on the sides.

When you look at Assassin’s Creed Connor costumes online, you may mistakenly think the jacket and shirt are two separate pieces.  However, that’s usually not the case.  In most instances, it’s a one-piece combination where the shirt and jacket are fused together.

True to an assassin’s form, the shirts often incorporate the iconic white hood from the video game that hangs low to help hide the wearer’s true identity.  Most jackets also feature buttons along the side, but these are simply for decoration and do not add any extra functionality to the costume.

Another realistic feature of many Connor Halloween costumes is the red belt that runs across the waist.  It’s also attached so you don’t need to worry about pinning it up or having it fall down.  In some of the deluxe Connor costumes, you’ll also find a slim brown harness that traverses the chest.  It’s not real leather, but it still looks fantastic!

Assassin’s Creed gamers will also appreciate the gloves included with some costumes.  These are typically fingerless, but can easily be switched out or replaced with full-fingered gloves if you live in a colder climate and will be outside for long periods of time during Halloween.

Some Connor costumes also feature brown gauntlets that run up the arms to the elbow.  They often feature silver buckles, small chains, and faux leather strips for tightening.  And let’s not forget the stylish chaps either that rise to just above the knee.

Many pictures of Connor Halloween costumes for kids and adults show pants, but be sure to check the costume description carefully.  Pants aren’t always included, and you may need to purchase these separately.  Shoes are another item you’ll need to pick up separately to complete your costume. 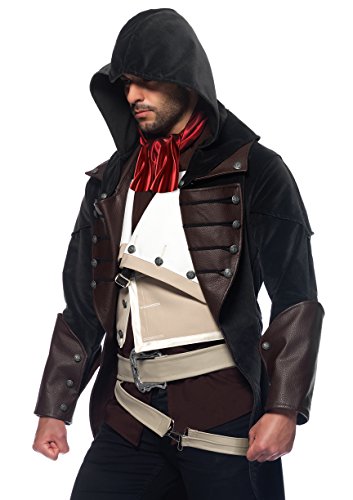 Along with the Connor costume, the Assassin’s Creed Unity costume is also an option this Halloween for fans of Arno Dorian.  It includes the legendary hood from the game series and typically comes with a long black coat with tails.  Also included are decorative buttons, red neck scarf, belt, and tan-white vest.

Assassin’s Creed Halloween costumes are hot and will sell out quickly.  Options and sizes are available for every member of your family, so be sure to check out the best deals online and order your costume early so you don’t miss out!