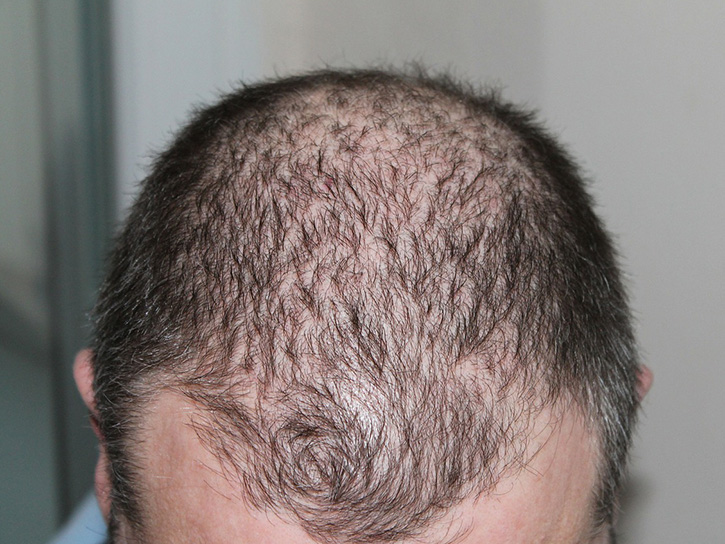 Hair loss doesn’t have to be a life sentence!

When it comes to understanding male pattern baldness, myths and misinformation abound. A multitude of home remedies and special concoctions are available on the market today, with many products making unsubstantiated claims. Yet, according to WebMD, there are only two proven ways to slow down male pattern baldness without resorting to transplantation surgery.

What are these methods?

The first is Minoxidil, which is an over the counter topical treatment that works well for some men. The second is Finasteride, an oral medication that can play a significant role in combating hair loss. To help you understand the specific benefits of each of these options, let’s examine them in more detail below.

Most well known by the brand name Rogaine, Minoxidil can be effective for some cases of male pattern baldness. Studies have shown that it works best when used by men under the age of 40 who have experienced recent hair loss (within the last five years). In addition, it has no effect upon a receding hairline, but only works to slow or reverse balding upon the crown of the head. Finally, Minoxidil provides the best results in cases where hair loss isn’t widespread.

How effective is it?

One study found that 40% of men regrew hair after 3 to 6 months of treatment. That being said, the American Hair Loss Association only recommends that Minoxidil be used if Finasteride proves to be ineffective, or as a secondary line of defense.

How does Minoxidil work?

The exact mechanism by which Minoxidil works is still not completely known, but it does promote blood flow to the scalp and opens potassium channels. For these reasons, researchers believe hair follicles receive more life-giving oxygen and nutrients which may promote hair growth. In addition, they postulate that Minoxidil induces the shedding of telogen phase hairs, which are subsequently replaced by thicker anagen phase hairs.

Unlike Minoxidil, which does not treat the underlying hormonal causes of hair loss, Finasteride has the ability to inhibit harmful dihydrotestosterone (DHT) in the scalp. It does this by targeting Type II 5-alpha-reductace, the enzyme which makes the conversion of testosterone into DHT possible.

This is critical, as DHT causes hair follicles to shrink in size over time, and eventually causes them to cease growing altogether. According to WebMD, clinical trials have demonstrated that an astonishing 86% of men taking Finasteride saw their hair loss halt it’s progression. In addition, and even more impressive, a full 65% of participants reported significant hair growth.

A further benefit of Finasteride, is its effectiveness on hair loss at the front of the scalp (a receding hairline). This makes it a more versatile treatment option as compared to Minoxidil, which only works upon the crown of the head.  Furthermore, Finasteride has also been shown to reduce the risk of prostate cancer in men.

However, experts do caution that Finasteride has been known to cause side effects like depression and erectile dysfunction. These side effects have led to the development of natural alternatives like the Rebuild Hair Program which targets the same 5-alpha-reductase and DHT pathway as Finasteride, but does it naturally via an advanced dietary protocol.

The use of Minoxidil and Finasteride means hair loss is no longer an inevitable outcome. These medicines are effective ways to slow down male pattern baldness, keep hair loss at bay, and in some cases stimulate regrowth.

While continued use is required to halt the progression of hair loss, Minoxidil and Finasteride provide a means to combat male pattern baldness in a meaningful way.  For those concerned about the potential side effects of these medications, treatments like Jared Gates’ hair loss protocol (the Rebuild Hair Program) provide natural alternatives that continue to grow in popularity.