Virtual reality games are the newest and most exciting form of gaming entertainment. Batman fans and thrill seekers alike can now immerse themselves in the world of the Dark Knight with the new Batman Arkham PlayStation VR Game.

What can you expect from this game? Let’s find out in our Batman Arkham VR review. 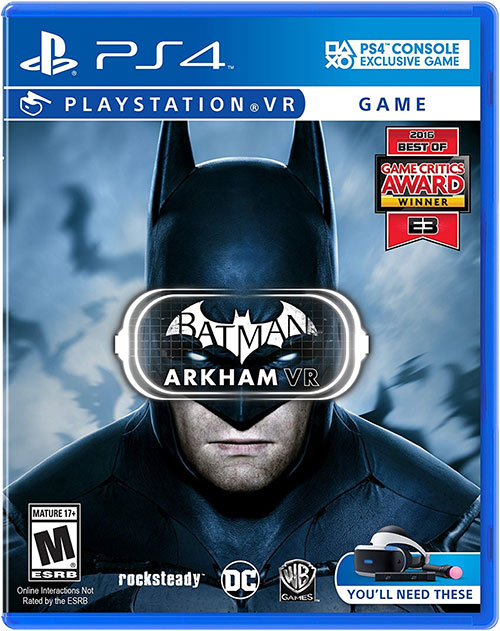 Batman Arkham PlayStation VR
Batman: Arkham VR immerses you in the Dark Knight's Universe and redefines what it means to be the Batman. Experience Gotham City through the eyes of the World's Greatest Detective in an all new Arkham mystery - a PlayStation 4 game exclusively for PlayStation VR.
I WANT THIS
Find It Here

Those familiar with other Arkham games like Arkham Origins, Arkham Asylum, Arkham City, and Arkham Knight will feel right at home in the world created by the Batman Arkham VR story. It’s the same backstory with one important difference: instead of simply being a passive observer, you become an active participant in the world of the Dark Knight.

During gameplay, you use the move controllers to traverse across the virtual world. Once firmly entrenched in a world of superheroes and villains, you’ll attempt to solve a violent murder.

This game puts your skills to the test as you discover clues and decide which steps to take to solve the crime. The game focuses on “solving” rather than “fighting”, but don’t let that deter you.

Despite the lack of “physical fighting” and relatively short gameplay, the Batman Arkham PlayStation VR game is fun, incredibly immersive, and visually stunning. It’s a big hit among gamers.

When you’re in old Gotham, you’ll experience life as both Bruce Wayne and Batman. Witness the pivotal moment when the young hero’s life is changed forever after his parents are brutally murdered.

Watch it. Live it. Feel it as the scene unfolds right in front of you. Experience the same fear and shock Bruce felt on that horrific day. Get drawn into the life of Bruce Wayne and everything that makes him Batman.

This video shows the first 12 minutes of the game…

Subtle touches throughout the game fully immerse you in the Arkham background. You’ll see Bruce in his mansion. You’ll feel truly connected to the person he became after his parents died.

As you advance through the Batman Arkham VR walkthrough, you’ll dress in the Batman suit and explore the secret lair of the Dark Knight – the secret area Bruce Wayne uses to keep his life as Batman secret from the outside world. It’s so real, you’ll feel just like the man in the suit as you become Batman.

Once the game begins, you must use your skills as Batman to solve a violent murder. This includes deploying various weapons.

Weapons include the grapple gun, batarangs, and a forensic scanner. With stunning visuals, you’re only slightly removed from actually using these weapons “in the flesh”.

The audio in the Batman Arkham VR game is top quality and picks up on minute sounds that greatly enhance the experience. The overall VR experience takes about 60-90 minutes to complete, so it’s relatively short by gaming standards. However, once you finish the game for the first time, there are additional quests that open up, so it does have replay value.

For those who want to “Be the Batman”, the Batman Arkham PlayStation VR is about as close as it gets to the real thing. It’s a mesmerizing look into the future of gaming, and a truly enjoyable experience.

For Pinterest Lovers: If you enjoyed this post and want to save this Batman Arkham PlayStation VR review for later or share it with friends, simply use the image below to pin this post to your board! Easy peasy!