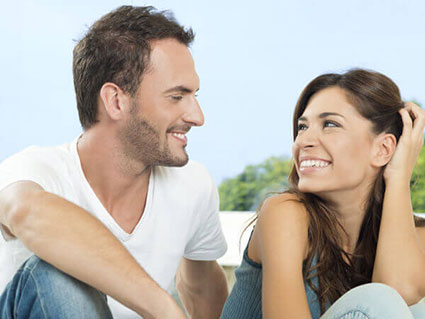 When talking to women, create attraction by taking a sincere interest in what she says.

Learning how to talk to women isn’t easy for a lot of men.  Just getting the nerve to approach a beautiful woman is hard enough.  But even when you do that, just getting past the beginning of a conversation can seem like an insurmountable obstacle.

So what should you do if you want to take a conversation beyond “Hello.”?  How do you talk to women in a way that gets you past boring introductions and on to a conversation that actually creates attraction, leads to a date, or escalates the interaction sexually?

The first trick is to not put too much pressure on yourself to say the “right thing”.  In other words, don’t psyche yourself out before you even begin.

The next trick is to use basic conversation and communication skills to get her to talk and to show a sincere interest in what she has to say.  The more she talks, the less you have to.  So how do you do that?  What do you say to women when you want to keep the conversation moving and keep her interested in you?

Start by listening intently to what she says and then consider the five W’s and one H: Who, What, When, Where, Why, and How. Ask interesting questions that get her to open up and start talking about herself.  The key point being “interesting”.  Asking her mundane questions about the weather, her job, etc. won’t create attraction.  She’s not here for a job interview.

This is your opportunity to get to know what really makes her tick while also standing out from every other man she comes in contact with.  When done correctly, one question leads to another and then another and before you know it a full-fledged conversation develops.

The most beautiful women are often the most difficult for men to get because they get bored really fast.  That’s the bad news. (Hint: Here’s how to keep a beautiful woman’s attention and even turn her into your girlfriend…)

The good news is, when you create fun, effortless conversation with a beautiful woman, not only does she stay interested, but she also becomes POWERFULLY attracted to you.  Why?  Because you’re so much different than all the other awkward, boring, and intimidated chumps they’re used to.

So let’s talk about the logistics of what to say to women.  Here are some examples of how to talk to women by using the five W’s (and one H).  These types of questions not only result in fun and interesting answers, but they also help you connect with a woman on a much deeper level.

Who: “Who has influenced you the most in your life and why?”

What: “What is something you have tried, but will never do again?”

When: “When did you last sing to yourself or someone else?  Tell me about it.”

Where: “Where’s the one place you would go if you could hop on a plane and go there right now?”

Why: “Is there something you’ve dreamed about doing for a long time?  Why haven’t you done it?”

How: “How would you change the way you currently live if you knew in one year you would die suddenly?”

The best types of questions are those that encourage a woman to talk so you can quickly and easily lead into additional questions.  In other words, when talking to women, try to avoid questions that can be answered with a simple yes or a no or a few short words.  The more involved her answer is, the easier it will be to carry on a conversation without awkward silences.

If you don’t feel comfortable asking the types of questions above with a woman you just met, you can ease into the conversation by offering up a quick compliment followed by a question.

The key is to show a sincere interest in her answers. A conversation will develop naturally after that.  Whatever question you choose, ask because you sincerely want to know her answer.  Don’t ask just to keep the conversation going.

As dating expert and author of “As You Are”, Nick Sparks, says…

“Instead of stressing yourself out over having the right thing to say — whether that fear drives you to silence or blabbing — start asking yourself the right question: “How do I show her I’m interested in who she is and what she has to say?” You’ll be surprised at how easy holding a conversation actually is.”