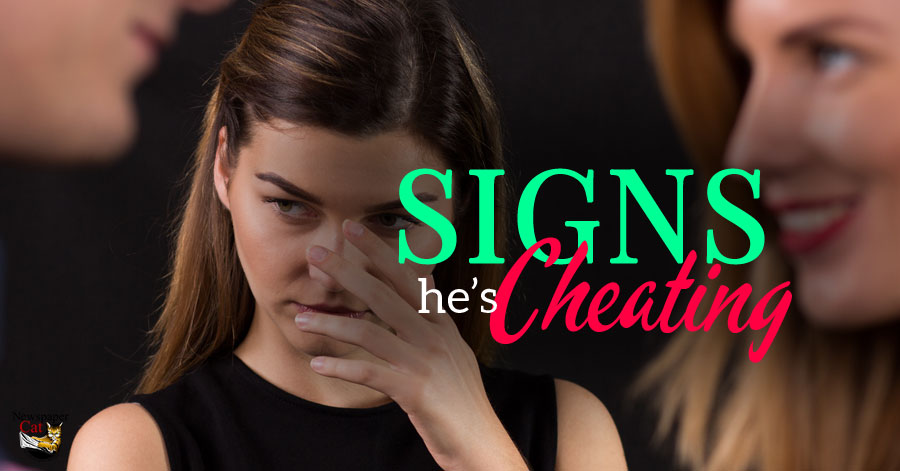 He’s pulling some shady shit – and you know it!

You can feel it in you’re gut! You’ve got a nervous knot in your stomach – the kind that gives you sleepless nights wondering what he might be up to and who he might be with.

You haven’t caught him with another woman’s panties in his pocket (yet), but you have that haunting feeling that something just isn’t right.

Is he cheating on you or are your emotions just getting the best of you?

Does he even REALLY love you? These 7 questions will tell you for sure!

Truth be told: until you catch him at his shenanigans or get some rock-solid proof, you have nothing on him – and everything else is just speculation.

If something feels off, I think it’s safe to say that you should trust your gut and keep your eyes peeled. If he’s cheating on you, there are some telltale signs you can look for.

Watch for these 9 signs he’s cheating on you and getting away with it. Exhibiting a few doesn’t mean he’s guilty. There are plenty of other reasons things might feel off.

However, if your man checks off most or all of the boxes, it’s very likely he’s doing something fishy with another woman behind your back.

1. He’s abnormally secretive about his “tech”

In today’s technological age, this is one of the most prominent signs he’s cheating on you. Respecting a person’s privacy is important and you shouldn’t be snooping around your boyfriend or husband’s phone or computer, but if he’s overly secretive when it comes to his tech, consider it a red flag.

2. His sexual appetite and or sexual style changes

Does he seem different in the bedroom? Has his sexual desire toward you suddenly disappeared? Is he normally always up for sex, but now seems disinterested when you try to turn him on? If so, it could be a sign he’s “getting his” somewhere else.

Likewise, if his sexual desire suddenly goes through the roof or he suddenly turns into Casanova in the bedroom, it could be a sign he’s being turned on by something or someone else or he’s trying to over-compensate to hide something from you. It could also be a sign he’s been experimenting and trying new things with someone else that he’s now incorporating into your own bedroom routine.

Does he seem to “check out” from the relationship a lot or seem like he always has something else on his mind? Does it feel like even when he’s with you, he’s not really present in the moment? This could be a sign his thoughts are on someone else.

4. He’s suddenly being almost TOO nice

As we talked about before, when some guys cheat, they can make themselves look suspicious by overcompensating. It’s a way to hide behind a guilty conscience.

For example, does he suddenly start bringing you gifts? Does he suddenly send you flowers when he’s never done that before? Does he start helping around the house more and then ask, “Is it ok if I go out with the guys this weekend?”

It could be that he’s simply trying to throw you off the trail of what’s really going on. The thought process is, “If I’m super lovey and sweet, she’ll never suspect a thing.”

5. He keeps his whereabouts a secret 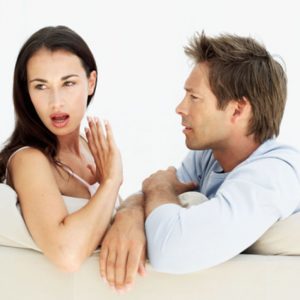 If a man is cheating on you, his actions will always speak louder than his words.

Another sign he’s cheating on you is if he disappears for long periods of time and you never know where he is.

Does he say he’s just running to the store, but then he’s gone for 4 hrs with no real explanation of where he’s been? Does he suddenly get up earlier for work or stay late? Does he “go out with the guys”, but then stay out way later than you’d expect without ever texting or calling to let you know what’s up?

Do you take him dinner at work because he says he has to stay late only to find he’s not there? Does every errand just seem to take him way longer than it used to?

All of these can be signs he’s not being honest with you about his whereabouts.

6.  He gets awkward around female friends or co-workers when you’re around

Does he act strange or seem awkward with you when certain female friends or co-workers are around? Maybe his body language changes or he gets a certain look or excitement in his eye when he talks to her. You know that look; it’s the same look he used to give you when he was lusting after you early on in your relationship.

If his demeanor changes around certain women, it could very well be that one of those female friends or co-workers is his cheating partner.

If you ask him seemingly innocent questions about what he did with the guys last night or how was the movie, does he get defensive, irritated, or even angry? Does he lash out at you like you’re trying to keep tabs on him? Or maybe he just tries to skirt around the question by giving a very generic answer like, “Oh, we just hung out.”

If he starts getting really defensive for no real reason, watch out!

Does he turn you into the bad guy if you try to have a serious conversation and express your feelings to him? For example, if you ask him about cheating by saying something like, “Things have been feeling a little off lately. Is everything ok? You seem distant, and I’m starting to worry you might be cheating on me”, does he quickly turn you into the bad guy and say things like…

“YOU never trust me.”

“YOU don’t allow me any freedom.”

If he turns you into the bad guy rather than validating your feelings and addressing your concerns, then there’s a good chance he’s cheating on you.

9. He changes his appearance

Does he suddenly grow a beard when he’s never had one before? Does he take more time to get ready and seem more concerned with how he looks before he goes out?

Did his clothing preferences suddenly change? Did he suddenly start wearing cologne or going to the gym all the time? Does he jump in the shower immediately after coming home from a night out?

These could all be indicators that he’s trying to impress someone else. As for the shower, that’s because he doesn’t want you to smell “her” on him.

Remember, your instincts will never cheat on you. You should trust them. But be rational about it.

Don’t become so paranoid that you let your emotions get the best of you and drive him away for no reason. Instead, work on building mutual respect and trust. Always trust him until he gives you a reason not to.

Trust is the keystone of any lasting, fulfilling relationship. But, if something feels off, you have every right to bring it up and address the issue with him. If he cares and isn’t cheating on you, then he should respect and validate your feelings and do what he can to reassure you.

When a man pulls away, often times it’s because he feels something is missing from your relationship. It doesn’t necessarily mean he’s cheating, but it does mean he’s not experiencing the deep emotional connection that makes him want to go “all in” on the relationship. The good news is, there are actually 12 words that can trigger a man’s love response. If your man is hot then cold, acting distant, or putting you last on the priority list, then you’ll definitely want to see this.